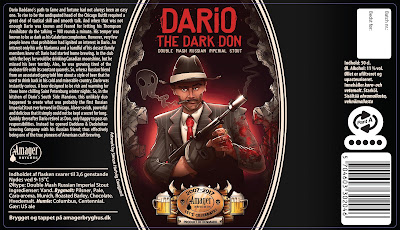 "Dario Daddano’s path to fame and fortune had not always been an easy one. To rise to be the undisputed head of the Chicago Outfit required a great deal of tactical skill and smooth talk. And when that was not enough Dario was known and feared for letting his Thompson Annihilator do the talking – 900 rounds a minute. His temper was known to be as dark as his Calabrian complexion. However, very few people knew that prohibition had ignited an interest in Dario. An interest only his wife Marianna and a handful of his closest family members knew of: Dario had started home brewing. In the club with the boys he would be drinking Canadian moonshine, but he missed his beer terribly. Also, he was growing tired of the mobster life with its constant quarrels. So, when a Russian friend from an associated gang told him about a style of beer that he used to drink back in his cold and miserable country, Dario was instantly curious. A beer designed to be rich and warming for those bone chilling Saint Petersburg winter nights. So, in the kitchen of Dario’s South Side Mansion, this unlikely duo happened to create what was probably the first Russian Imperial Stout ever brewed in Chicago. A beer so rich, powerful and delicious that it simply could not be kept a secret for long. Quickly thereafter Dario retired as Don, only happy to pass on responsibilities. Instead he opened Daddano & Dadolnikov Brewing Company with his Russian friend; thus effectively being one of the true pioneers of American craft brewing." 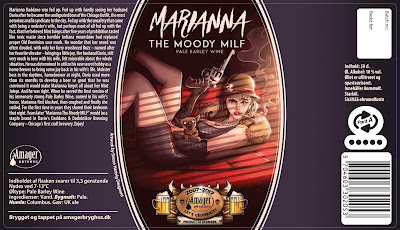 "Marianna Daddano was fed up. Fed up with hardly seeing her husband Dario after he became the undisputed boss of the Chicago Outfit, the most notorious mafia syndicate in the city. Fed up with the unsafety that came with being a mobster’s wife, but perhaps most of all fed up with the fact, that her beloved Mint Juleps after five years of prohibition tasted like toxic waste since horrible Indiana moonshine had replaced proper Old Dominion sour mash. No wonder that her mood was often clouded, with only her furry crossbreed Buzz – named after her favorite vibrator – bringing a little joy. Her husband Dario, still very much in love with his wife, felt miserable about the whole situation. He was determined to utilize his new secret hobby as a home brewer to bring some joy back in his wife’s life. Mobster boss in the daytime, homebrewer at night, Dario used more than six months to develop a beer so good that he was convinced it would make Marianna forget all about her Mint Juleps. And he was right. When he served the final version of his immensely strong Pale Barley Wine, named in his wife’s honor, Marianna first blushed, then coughed and finally she smiled. For the first time in years they shared their bedroom that night. Years later “Marianna The Moody MILF” would be a staple brand in Dario’s Daddano & Dadolnikov Brewing Company – Chicago’s first craft brewery. Enjoy!" 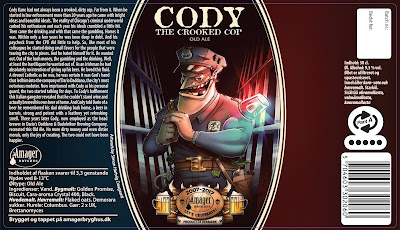 "Cody Kane had not always been a crooked, dirty cop. Far from it. When he started in law enforcement more than 20 years ago he came with bright ideas and beautiful ideals. The reality of Chicago’s criminal underworld curbed his enthusiasm and each year his ideals crumbled a little bit. Then came the drinking and with that came the gambling. Horses it was. Within only a few years he was knee deep in debt. And his paycheck from the CPD did little to help. So, like most of his colleagues he started doing small favors for the people that were tearing the city to pieces. And he hated himself for it. He wanted out. Out of the hush money, the gambling and the drinking. Well, at least the hard liquor he wanted out of. As an Irishman he had absolutely no intention of giving up his beer. He loved this fluid. A devout Catholic as he was, he was certain it was God’s hand that led him into the company of Dario Daddano, the city’s most notorious mobster. Now imprisoned with Cody as his personal guard, the two started talking for days. To Cody’s bafflement this Italian gangster revealed that he couldn’t stand wine and actually brewed his own beer at home. And Cody told Dario of a beer he remembered his dad drinking back home, a beer in barrels, strong and potent with a leathery yet refreshing smell. Three years later Cody, now employed as the head brewer in Dario’s Daddano & Dadolnikov Brewing Company, recreated this Old Ale. No more dirty money and even dirtier morals, only the joy of creating. The two could not have been happier." 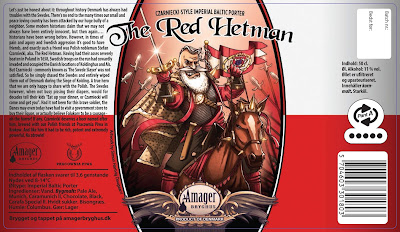 "The Red Hetman: Let's just be honest about it: throughout history Denmark has always had troubles with the Swedes. There's no end to the many times our small and peace loving country has been attacked by our huge bully of a neighbor. Some modern historians claim that we may not always have been entirely innocent, but then again…. historians have been wrong before. However, in times of pain and agony and Swedish aggression it's good to have friends, and exactly such a friend was Polish nobleman Stefan Czarniecki, aka. The Red Hetman. Having had their asses severely beaten in Poland in 1658, Swedish troops on the run had cowardly invaded and occupied the Danish locations of Koldinghus and Als. But Czarniecki - commonly known as 'The Swede Slayer' was not satisfied. So he simply chased the Swedes and entirely wiped them out of Denmark during the Siege of Kolding. A true hero that we are only happy to share with the Polish. The Swedes however, when not busy pissing their diapers, would for decades tell their kids "Eat up your dinner, or Czarniecki will come and get you". Had it not been for this brave soldier, the Danes may even today have had to visit a government store to buy their liquor, or actually believe Falukorv to be a sausage - oh the horror! If any, Czarniecki deserves a beer named after him, brewed with our Polish friends at Pracownia Piwa in Krakow. And like him it had to be rich, potent and extremely powerful. Na zdrowie!"
kl. 06.00
Send med mailBlog om dette!Del via TwitterDel via FacebookDel på Pinterest
Etiketter: Amager Bryghus, ølnyt
Nyere indlæg Ældre indlæg Start