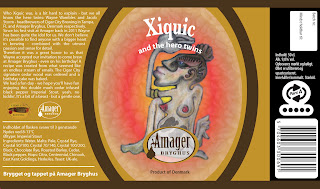 "Who Xiquic was, is a bit hard to explain - but we all know the hero twins: Wayne Wambles and Jacob Storm - headbrewers of Cigar City Brewing in Tampa, FL and Amager Bryghus, Denmark respectively. Since his fi rst visit at Amager back in 2011 Wayne has been quite the idol for us. We don't believe it's possible to fi nd anyone with a bigger heart in brewing - combined with the utmost passion and sense for detail. Therefore it was a great honor to us that Wayne accepted our invitation to come brew at Amager Bryghus - even on his birthday! A recipe was created from what seemed like an endless stream of emails. The Cigar City signature cedar wood was ordered and a birthday cake was baked. We had a fun day - we hope you'll have fun enjoying this double mash cedar infused black pepper Imperial Stout, yeah, no kiddin'. It's a bit of a beast - but a gentle one." 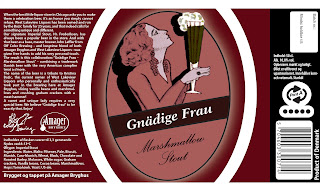 "When the best little liquor store in Chicago asks you to make them a celebration beer, it’s an honor you simply cannot refuse. West Lakeview Liquors has been owned and run by the Bozic family for 25 years, and that indeed calls for something unique and di fferent. Our signature Imperial Stout, Hr. Frederiksen, has always been a popular beer in the store. And with that beer as a base, master brewer John La er from O ff Color Brewing - and longtime friend of both Amager Bryghus and West Lakeview Liquors - was given free hands to add his very personal touch. The result is this collaboration: “Gnädige Frau - Marshmallow Stout” - combining a trademark Danish beer with the very American camp fire treat a s’more. The name of the beer is a tribute to Kristina Bozic, the current owner of West Lakeview Liquors who personally and enthusiastically took part in the brewing here at Amager Bryghus, slicing vanilla beans and marshmallows and crushing graham crackers with a meat hammer! A sweet and unique lady requires a very special beer. We believe “Gnädige Frau” to be exactly that. Enjoy!"
kl. 06.00
Send med mailBlog om dette!Del via TwitterDel via FacebookDel på Pinterest
Etiketter: Amager Bryghus
Nyere indlæg Ældre indlæg Start