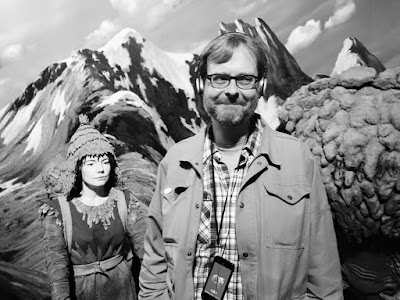 What is your favorite beer?
This changes a bit. For a long time, I would say La Chouffe, but these days, I'm a fan of classic gueuzes and I think Oude Beersel is my favorite at the moment. I was in Brussels for Toer de Gueuze this year and visited a bunch of breweries. Oude Beersel probably stole the show for me, but so many great, classic places. I have a bit of a beer cellar, but I've been working hard to demystify the idea of "white whales" and beer hoarding. Fuck it, if the time is right, the top is coming off. For the Crime & Punishment Grand Opening, after we shut the doors, I brought out some stuff I'd been saving: Bullfrog Brewery's Le Roar Grrz, first bottled batch, a De Molen Hel & Verdoemenis 666 edition, Guezerie Tilquin Mûre, a 2009 Cantillon Grand Cru Bruocsella, and aged Dieu du Ciel Peche Mortel. Some other folks had some cellared Russian River sours and aged Jolly Pumpkins.

What is your favorite beer type?
Gueuze, if it's available. I tend to favor well-made sours. A good dry IPA would be next.

Where do you buy your beer?
My state has very strange beer laws, making it difficult or expensive to buy single beers. I often buy beers direct from breweries when I visit, import them back from Europe, or go to a place in Maryland called State Line Liquors.

What has been your greatest beer experience?
I would probably say the Ring Them Bells project was the greatest. From the night where Mikael and I visited the Mikkeller pub, had enough to drink where Mikael convinced me it would be a good idea, to talking a bunch to Mikkel and Jacob about the project, working with Ring Them Bells on the release, meeting up with Mikkel at The Festival in Worcester, MA, visiting the Mikkeller offices to drink more beer and talk about the final release steps, to roasting coffee with a few friends who did home brew batches of the recipe etching on the B-side of the vinyl. Such a great time. And the beer is really damn tasty, too. But, I think the coffee I roasted might taste a bit nicer. We just did a recent batch where I pulled some shots of single origin espresso that I roasted. It used Guatemalan Gesha coffee which is somewhat rare and highly prized. It tasted incredible.

What makes beer so great?
Beer is really about bringing people together for me. Really, the greatest beer experience is whatever the most recent one I've had with hanging out with friends drinking beer. Last night, some old friends and I met up for our '90s emo late night happy hour at Crime and Punishment and it was just a spectacular time. Who knows what the week will bring...
kl. 06.00
Send med mailBlog om dette!Del via TwitterDel via FacebookDel på Pinterest
Etiketter: Poesibogen
Nyere indlæg Ældre indlæg Start