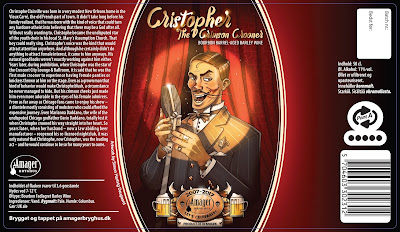 Cristopher The Crimson Crooner, Bourbon barrel-aged Barley Wine, 11%.
Christophe Clairville was born in a very modest New Orleans home in the Vieux Carré, the old French part of town. It didn’t take long before his family realized, that he was born with the kind of voice that could turn any hardcore atheist into believing that there may be a God after all. Without really wanting to, Christophe became the undisputed star of the youth choir in his local St. Mary’s Assumption Church. That boy could really sing. Christophe's voice was the kind that would attract attention anywhere. And although he certainly didn’t do anything to attract female interest, it came to him anyways. His natural good looks weren't exactly working against him either. Years later, during prohibition, when Christophe was the star of the Crescent City Lounge & Ballroom, it is said that he was the first male crooner to experience having female panties or knickers thrown at him on the stage. Even as a grown man that kind of behavior would make Christophe blush, a circumstance he never managed to hide. But his crimson cheeks just made him even more adorable in the eyes of his female admirers. From as far away as Chicago fans came to enjoy his show – a clientele mostly consisting of mobsters who could afford the expensive journey. Even Marianna Daddano, the wife of the undisputed Chicago godfather Dario Daddano, totally lost it when Christophe crooned his way straight into her heart. So years later, when her husband – now a law abiding beer manufacturer – reopened his re-licensed nightclub, it was only natural that Christophe, now Cristopher, was the leading act – and he would continue to be so for many years to come. 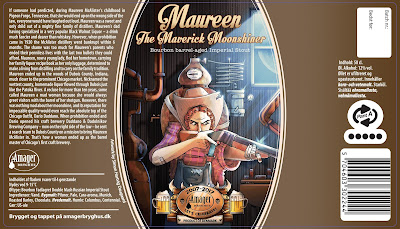 Maureen the Maverick Moonshiner, Bourbon barrel-aged Imperial Stout, 12%.
If someone had predicted, during Maureen McAlister’s childhood in Pigeon Forge, Tennessee, that she would end up on the wrong side of the law, everyone would have laughed out loud. Maureen was a sweet and only child out of a mighty fine family of distillers. Maureen’s dad having specialized in a very popular Black Walnut Liquor – a drink much fancier and dearer than whiskey. However, when prohibition came in 1920 the McAlister distillery went bankrupt within 6 months. The shame was too much for Maureen’s parents who ended their penniless lives with the last two bullets they could afford. Maureen, now a young lady, fled her hometown, carrying her family liquor recipe book as her only luggage, determined to make a living from distilling and to carry on the family tradition. Maureen ended up in the woods of Dubois County, Indiana, much closer to the prominent Chicago market. Nicknamed the wettest county, homemade liquor flowed through Dubois just like the Patoka River. A recluse for more than ten years, some called Maureen a mad woman because she would always greet visitors with the barrel of her shotgun. However, there was nothing mad about her moonshine, and its reputation for impeccable quality would even reach the absolute top of the Chicago Outfit, Dario Daddano. When prohibition ended and Dario opened his craft brewery Daddano & Dadolnikov Brewing Company – now on the right side of the law – he sent a search team to Dubois County on a mission to bring Maureen McAlister in. That’s how a woman ended up as the barrel master of Chicago’s first craft brewery. 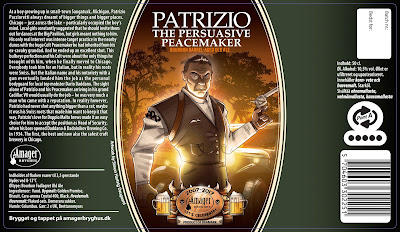 As a boy growing up in small-town Saugatuck, Michigan, Patrizio Paccioretti always dreamt of bigger things and bigger places. Chicago – just across the lake – particularly occupied the boy’s mind. Local girls constantly suggested that he should invite them out for dances at the Big Pavilion, but girls meant nothing to him. His only real interest was intense target practice in the nearby dunes with the huge Colt Peacemaker he had inherited from his ex-cavalry grandad. And he ended up an excellent shot. This bullseye perfection and his Colt were about the only things he brought with him, when he finally moved to Chicago. Everybody took him for an Italian, but in reality his roots were Swiss. But the Italian name and his notoriety with a gun eventually landed him the job as the personal bodyguard for local top mobster Dario Daddano. The sight alone of Patrizio and his Peacemaker arriving in his grand Cadillac V8 would usually do the job – he was very much a man who came with a reputation. In reality however, Patrizio had never shot anything bigger than a rat; maybe it was his Swiss roots that made him want to keep it that way. Patrizio's love for Doppio Malto brews made it an easy choice for him to accept the position as Head of Security, when his boss opened Daddano & Dadolnikov Brewing Co. in 1934. The first, the best and now also the safest craft brewery in Chicago.
kl. 06.00
Send med mailBlog om dette!Del via TwitterDel via FacebookDel på Pinterest
Etiketter: Amager Bryghus
Nyere indlæg Ældre indlæg Start