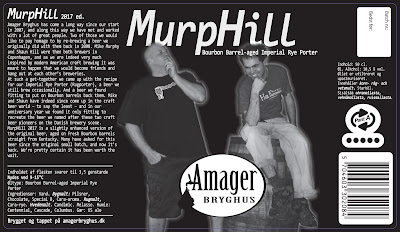 Amager Bryghus has come a long way since our start in 2007, and along this way we have met and worked with a lot of great people. Two of those we would like to pay homage to by re-brewing a beer we originally did with them back in 2012. Mike Murphy and Shaun Hill were then both brewers in Copenhagen, and as we are indeed very much inspired by modern American craft brewing it was meant to happen that we would become friends and hang out at each other’s breweries. At such a get-together we came up with the recipe for our Imperial Rye Porter (Rugporter), a beer we still brew occasionally. And a beer we found fitting to put on Bourbon barrels back them. Mike and Shaun have indeed since come up in the craft beer world – to say the least – and in our anniversary year we found it only fitting to recreate the beer we named after these two craft beer pioneers on the Danish brewery scene. MurpHill 2017 is a slightly enhanced version of the original beer, aged on fresh Bourbon barrels straight from Kentucky. Many have asked for this beer since the original small batch, and now it’s back. We’re pretty certain it has been worth the wait. 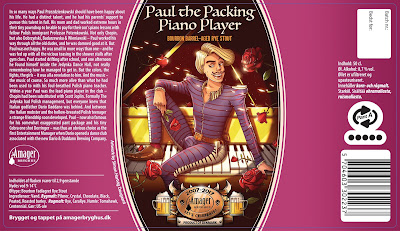 In so many ways Paul Przezdzienkowski should have been happy about his life. He had a distinct talent, and he had his parents' support to pursue this talent in full. His mom and dad worked extreme hours in their tiny pawnshop to be able to pay for their son’s piano lessons with fellow Polish immigrant Professor Potemkowski. Not only Chopin, but also Dobrzyński, Badarzewska & Wieniawski – Paul worked his way through all the old dudes, and he was damned good at it. But Paul was not happy. He was small in more ways than one – and he was fed up with all the vicious teasing in the shower stalls after gym class. Paul started drifting after school, and one afternoon he found himself inside the Jedynka Dance Hall, not really remembering how he managed to get in. But the colors, the lights, the girls – it was all a revelation to him. And the music – the music of course. So much more alive than what he had been used to with his foul-breathed Polish piano teacher. Within a year Paul was the lead piano player in the club – Chopin had been substituted with Scott Joplin. Formally The Jedynka had Polish management, but everyone knew that Italian godfather Dario Daddano was behind. And between the Italian mobster and the hollow-breasted Polish teenager a strange friendship soon developed. Paul – now also famous for his somewhat exaggerated pant package and his tiny Cobra one shot Derringer – was thus an obvious choice as the first Entertainment Manager when Dario opened a dance club associated with the new Dario & Daddano Brewing Company.
kl. 06.00
Send med mailBlog om dette!Del via TwitterDel via FacebookDel på Pinterest
Etiketter: Amager Bryghus
Nyere indlæg Ældre indlæg Start