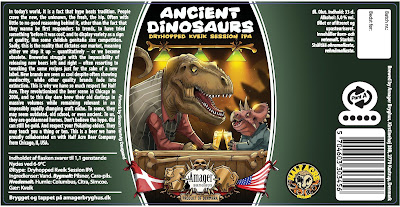 In today’s world, it is a fact that hype beats tradition. People crave the new, the unknown, the fresh, the hip. Often with little to no good reasoning behind it, other than the fact that they wanna be first responders to trends, to have tried something ‘before it was cool’, and to display variety as a sign of quality, like some childish genitalia size competition. Sadly, this is the reality that dictates our market, meaning either we step it up – quantitatively – or we become obsolete. Breweries struggle with the impossibility of releasing new beers left and right – often resorting to tweaking the same recipes just for the sake of a new label. New brands are seen as cool despite often showing mediocrity, while other quality brands fade into extinction. This is why we have so much respect for Half Acre. They revolutionized the beer scene in Chicago in 2006, and to this day dare brew their old darlings in massive volumes while remaining relevant in an impossibly rapidly changing craft niche. To some, they may seem outdated, old school, or even ancient. To us, they are goddamned heroes. Don’t believe the hype. Old can still be gold. And respect your f%&@ing elders. They may teach you a thing or ten. This is a beer we have proudly collaborated on with Half Acre Beer Company from Chicago, Il, USA. 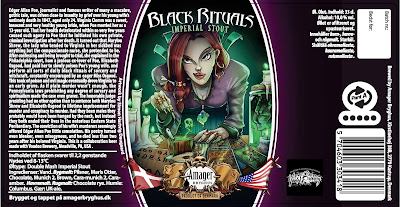 Edgar Allan Poe, journalist and famous writer of many a macabre, gothic tale, was driven close to insanity by grief over his young wife’s untimely death in 1847, aged only 24. Virginia Clemm was a sweet, innocent and very healthy young bride, when Poe married her as a 13-year old. That her health deteriorated within so very few years caused such agony to Poe that he initiated his own private, criminal investigation after her death. It turned out that Marylou Shrew, the lady who tended to Virginia in her sickbed was anything but the compassionate nurse, she pretended to be. After confessing and being brought to trial, she explained in the Philadelphia court, how a jealous ex-lover of Poe, Elizabeth Osgood, had paid her to slowly poison Poe’s young wife, and perform all sorts of daily black rituals of sorcery and witchcraft, constantly encouraged by an eager Miss Osgood. This tonic of poison and evil magic eventually drove Virginia to an early grave. As if plain murder wasn’t enough, the Pennsylvania laws prohibiting any degree of sorcery and spiritualism made the case even graver. The honorable judge presiding had no other option than to sentence both Marylou Shrew and Elizabeth Osgood to lifetime imprisonment for murder and conspiracy to murder. Had they been males they probably would have been hanged by the neck, but instead they both ended their lives in the notorious Eastern State Penitentiary. The conviction of his wife’s murderers seemingly offered Edgar Allan Poe little consolation. His poetry turned even bleaker, even misogynous, and he died less than two years after his beloved Virginia.
This is a collaboration beer made with Voodoo Brewery, Meadville, PA, USA. 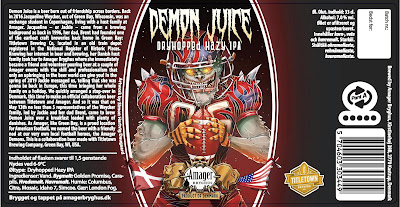 
Demon Juice is a beer born out of friendship across borders. Back in 2016 Jacqueline Weycker, out of Green Bay, Wisconsin, was an exchange student in Copenhagen, living with a host family at Amager. Jacqueline – or Jackie – came from a brewing background as back in 1996, her dad, Brent had founded one of the earliest craft breweries back home in Green Bay: Titletown Brewing Co, located in an old train depot registered in the National Register of Historic Places. Knowing her interest in beer and brewing, her Danish host family took her to Amager Bryghus where she immediately became a friend and volunteer pouring beer at a couple of Amager events with the skill and professionalism that only an upbringing in the beer world can give you! In the spring of 2019 Jackie messaged us, telling that she was gonna be back in Europe, this time bringing her whole family on a holiday. We quickly arranged a stop-over in Denmark, this time to make an official collaboration beer between Titletown and Amager. And so it was that on May 13th no less than 5 representatives of the Weycker family, led by Jackie and her dad Brent, came to brew Demon Juice over a breakfast loaded with plenty of danishes. As Amager, like Green Bay, is a proud location for American football, we named the beer with a friendly nod at our very own local football heroes, the Amager Demons. This is a collaboration beer made with Titletown Brewing Company, Green Bay, WI, USA. 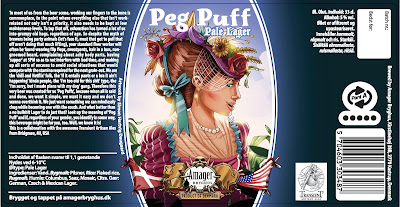 To most of us from the beer scene, working our fingers to the bone is commonplace, to the point where everything else that isn't work-related not only isn't a priority, it also needs to be kept at low maintenance levels. To top that off, exhaustion has turned a lot of us into grumpy old hags, regardless of age. So despite the myth of brewers being party animals (let's face it, most that get to pull that off aren't doing that much lifting), your standard floor worker will often be found wearing flip flops, sweatpants, hair in a bun, non-groomed beard, complaining about achy body parts, having 'supper' at 5PM so as to not interfere with bed time, and making up all sorts of excuses to avoid social situations that would compete with the stamina required for the next grain-out. We are the 'chill and Netflix' folk, the 'if it entails pants or a bra it ain't happening' kinda people, the 'I'm too old for this shit' type, the 'I'm sorry, but I made plans with my dog' gang. Therefore this very beer was created for us 'Peg Puffs', because when all is said and done, we want it simple, we want it easy and we don't wanna overthink it. We just want something we can mindlessly chug while becoming one with the couch. And what better than a no bullshit Lager to do just that? Look up the meaning of ‘Peg Puff’ and if, regardless of your gender, you identify in some way, this beverage might be for you, too. Well, we know it is!
This is a collaboration with the awesome Transient Artisan Ales from Bridgman, MI, USA. 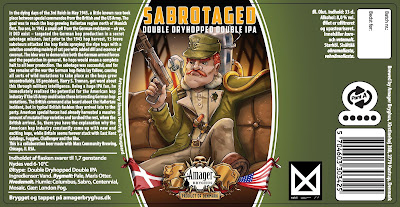 
In the dying days of the 3rd Reich in May 1945, a little known race took place between special commandos from the British and the US Army. The goal was to reach the hop growing Hallertau region north of Munich first. You see, in 1943 a small cell from the German resistance – oh yes, it DID exist – targeted the German hop production in a secret sabotage mission. Just prior to the 1943 hop harvest, 15 brave saboteurs attacked the hop fields spraying the ripe hops with a solution consisting mainly of cat pee with added dill and essence of coconut. The idea was to demoralize both the German armed forces and the population in general. No hops would mean a complete halt to all beer production. The sabotage was successful, and for the remains of the war the German hop fields lay fallow, causing all sorts of wild mutations to take place as the hops grew uncontrollably. US president, Harry S. Truman, got word about this through military intelligence. Being a huge IPA fan, he immediately realized the potential for the American hop industry if the US Army could seize these interesting German hop mutations. The British command also heard about the Hallertau incident, but in typical British fashion they arrived late to the party. American special forces had already harvested a massive amount of mutated hop varieties and torched the rest, when the British arrived. So, there you have the explanation why the American hop industry constantly come up with new and exciting hops, while Britain seems forever stuck with East Kent Goldings, Fuggles, Challenger and the like. 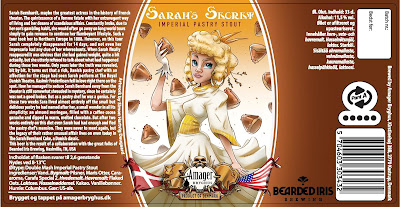 
Sarah Bernhardt, maybe the greatest actress in the history of French theater. The quintessence of a femme fatale with her extravagant way of living and her dozens of scandalous affairs. Constantly broke, due to her son’s gambling habit, she would often go away on long world tours simply to gain revenue to continue her flamboyant lifestyle. Such a tour took her to Northern Europe in 1888. However, on this tour Sarah completely disappeared for 14 days, and not even her impresario had any clue of her whereabouts. When Sarah finally reappeared it was obvious that she had gained weight, quite a bit actually, but she utterly refused to talk about what had happened during those two weeks. Only years later the truth was revealed, bit by bit. It turns out that a rich, Danish pastry chef with an affection for the stage had seen Sarah perform at The Royal Danish Theatre. Kasimir Frederiksen fell in love right there on the spot. How he managed to seduce Sarah Bernhard away from the theater is still somewhat shrouded in mystery, since he certainly was not a good looker. But as a pastry chef he was a genius. For those two weeks Sara lived almost entirely off the small but delicious pastry he had named after her, a small wonder in all its simplicity: an almond meringue, filled with a coffee cocoa ganache and dipped in warm, melted chocolate. But after two weeks entirely on this diet even Sarah had had enough and fled the pastry chef’s mansion. They were never to meet again, but the legacy of their rather unusual affair lives on even today in The Sarah Bernhard Cake, a Danish classic.
This beer is the result of a collaboration with the great folks of Bearded Iris Brewing, Nashville, TN, USA