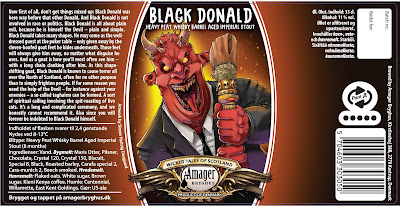 Etikettekst: Now first of all, don't get things mixed up: Black Donald was here way before that other Donald. And Black Donald is not involved in race or politics. Black Donald is all about plain evil, because he is himself the Devil - plain and simple. Black Donald takes many shapes. He may come as the well-dressed guest at the poker table - only given away by the cloven-hoofed goat feet he hides underneath. Those feet will always give him away, no matter what disguise he uses. And as a goat is how you'll most often see him - with a long chain clanking after him. As this shape-shifting goat, Black Donald is known to cause terror all over the North of Scotland, often for no other purpose than to simply frighten people. If for some reason you need the help of the Devil - for instance against your enemies - a so called taghairm can be formed. A sort of spiritual calling involving the spit-roasting of live cats. It's a long and complicated ceremony, and we honestly cannot recommend it. Also since you will forever be indebted to Black Donald himself. 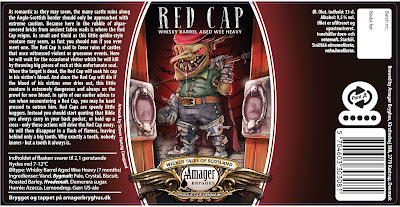 Etikettekst: As romantic as they may seem, the many castle ruins along the Anglo-Scottish border should only be approached with extreme caution. Because here in the rubble of algae-covered bricks from ancient fallen walls is where the Red Cap reigns. As small and timid as this little goblin-style creature may seem, as fast you should run if you ever meet one. The Red Cap is said to favor ruins of castles that once witnessed violent or gruesome events. Here he will wait for the occasional visitor which he will kill by throwing big pieces of rock at this unfortunate soul. When the target is dead, the Red Cap will soak his cap in his victim's blood. And since the Red Cap will die if the blood of his victims ever dries out, this little creature is extremely dangerous and always on the prowl for new blood. In spite of our earlier advice to run when encountering a Red Cap, you may be hard pressed to outrun him. Red Caps are speedy little buggers. Instead you should start quoting that Bible you always carry in your back pocket, or hold up a cross - only these actions will drive the Red Cap away. He will then disappear in a flash of flames, leaving behind only a big tooth. Why exactly a tooth, nobody knows - but a tooth it always is. 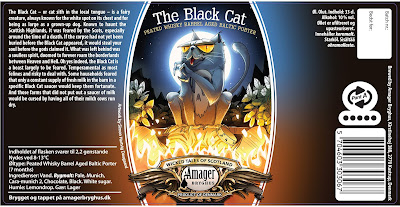 Etikettekst: The Black Cat - or cat sith in the local tongue - is a fairy creature, always known for the white spot on its chest and for being as large as a grown-up dog. Known to haunt the Scottish Highlands, it was feared by the Scots, especially around the time of a death. If the corpse had not yet been buried before the Black Cat appeared, it would steal your soul before the gods claimed it. What was left behind was a soulless spirit, doomed to forever roam the borderlands between Heaven and Hell. Oh yes indeed, the Black Cat is a beast largely to be feared. Temperamental as most felines and risky to deal with. Some households feared that only a constant supply of fresh milk in the barn in a specific Black Cat saucer would keep them fortunate. And those farms that did not put out a saucer of milk would be cursed by having all of their milch cows run dry. 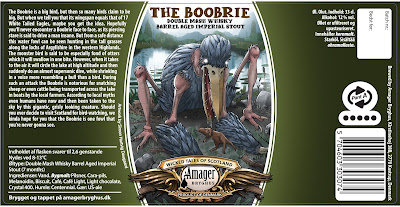 Etikettekst: The Boobrie is a big bird, but then so many birds claim to be big. But when we tell you that its wingspan equals that of 17 White Tailed Eagles, maybe you get the idea. Hopefully you'll never encounter a Boobrie face to face, as its piercing stare is said to drive a man insane. But from a safe distance this water fowl can be seen hunting in the tall grasses along the lochs of Argyllshire in the western Highlands. The monster bird is said to be especially fond of otters which it will swallow in one bite. However, when it takes to the air it will circle the lake at high altitude and then suddenly do an almost supersonic dive, while shrieking in a voice more resembling a bull than a bird. During such an attack the Boobrie is notorious for snatching sheep or even cattle being transported across the lake in boats by the local farmers. According to local myths even humans have now and then been taken to the sky by this gigantic, grisly looking creature. Should you ever decide to visit Scotland for bird-watching, we kinda hope for you that the Boobrie is one fowl that you're never gonna see.
kl. 06.00
Send med mailBlog om dette!Del via TwitterDel via FacebookDel på Pinterest
Etiketter: Amager Bryghus
Nyere indlæg Ældre indlæg Start